Other mercenary units fly flags at two flagpoles at their headquarters, one with their unit’s flag, and other bearing the flag of their current employer. However, the Third Regimental Combat Team—a.k.a. the Eridani Light Horse—leaves one flagpole bare, as a reminder of the death of the Star League, and the other pole flies the Light Horse’s unit and regimental flags at half-mast.

What triumphs and tragedies shaped the Eridani Light Horse and its traditions? What drove them to become a force to be reckoned with, an elite mercenary unit with one of the longest histories and the deepest traditions in the Inner Sphere? Witness the unit’s origins in the Star League and follow their evolution all the way through the Succession Wars and the Clan Invasion to their downfall in the Dark Age and their resurrection in the uncertain future of the ilClan era.

I: Conflicts Of Interest

IV: The Hand that Feeds

V: There’s no We in Mercenary

VII: View from the Ground

VIII: No Dust no Wear

IX: The Day when Heaven was Faling

I: The Price of Duty

Former hauptmann Ronan Carlyle is a man without a nation. After his former commanding officer declared herself governor-general of a reborn Tamar Pact, Ronan, a loyal Steiner officer, led a group of soldiers and techs including his sister, Isobel, back for Garrison for reassignment.

But on Garrison, his troubles multiply. The senior Lyran officer brands the 26th Arcturan loyalists traitors and cashiers them, stranding nearly 200 former LCAF soldiers, technicians, and crewmen on a Lyran world with no way off-planet.

Forced to scrounge up a way to survive, Ronan and Isobel hatch a plan to get the former LCAF members back to their homeworlds by salvaging ’Mechs. But when a Lyran scout battalion goes AWOL over an off-world mission squashed by their commanding officer, the LCAF is shocked to discover the Arcturan loyalists have built up have the largest contingent of combat equipment outside the militia. Ronan’s people need cash. They have skills. And there’s history in his name…

Thus, the Gray Death Legion is reborn. First as a way to get funds for his people to leave. But they fight the Lyran unit—winning by use of unorthodox tactics—and discover they don’t want to disband…instead, the reborn mercenary unit wants to find its next employer…

For new mercenary groups just starting out, one of the primary rules is “Follow the money.” Even when it’s being paid by the same people who forced you to become a mercenary unit in the first place.

Ronan and Isobel Carlyle are experiencing this right now, having accepted a contract from the newly-formed Tamar Pact, the cluster of planets that recently seceded from the Lyran Commonwealth—and got the once loyal-Carlyle siblings cashiered as turncoats.

Now the Pact wants the Legion’s help with one of their newer planets, Crimond. But murky mission parameters and an unhelpful liaison officer leaves Ronan and Bel wondering who’s a friend and who’s a foe. And when the Legion splits up to handle two different missions, Bel finds herself an entire continent away, on a mission to scout an abandoned Star League base. But she soon discovers the base—and the nearby community—is anything but abandoned…and if she doesn’t act fast, she and her GDL commandos will receive a welcome they won’t walk away from…

I: Not the Way the Smart Money Bets 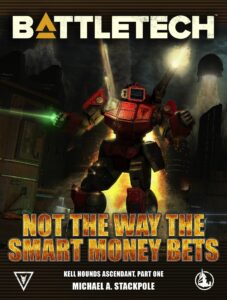 THE RULES OF THE GAME HAVE JUST CHANGED…

Brothers Morgan and Patrick Kell have just landed on Galatea, the mercenary planet known for its brutal arena ’Mech combat games. They intend to found their own merc unit, building it from the ground up, but there are a few obstacles in their way. The first is a corrupt general fronting for the second, a local crime lord named Haskell Blizzard who crushes anyone he sees as a threat. And the Kell boys offering lucrative contracts for the best ’Mechwarriors and techs on the planet is a definite threat to his illegal empire.

But what Blizzard doesn’t know is that the Kell brothers have faced long odds before, and come out on top every single time. And with the help of some old and new friends, they’re going to take this crime lord down using his own tactics against him.

When the chips are down, the smart money is always on the brothers Kell.

II: A Tiny Spot of Rebellion 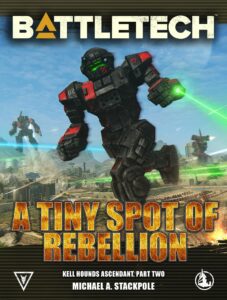 DANGER FROM AN UNLIKELY SOURCE…

MechWarrior brothers Morgan and Patrick Kell have successfully faced their first challenge in forming their new mercenary unit The Kell Hounds, toppling a criminal kingpin from atop his illegal empire on Galatea.

But while enjoying their recent success, the brothers Kell, along with the capital city of Galaport, come under threat by a new enemy—Bishop Arlington Poore, a religious zealot who wants to bring the entire planet under his repressive theocracy—and is willing to starve millions to do it.

Soon enough, the newly-formed Kell Hounds have their first job—put down this uprising as quickly as possible. But when a madman has converted thousands of civilians to his side, how will Morgan and Patrick quash his misguided crusade without shedding innocent blood?

III: A Clever Bit of Fiction 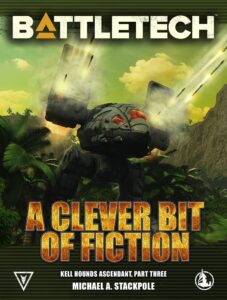 A DANGEROUS MIX OF POLITICS AND PERIL…

Morgan and Patrick Kell, founders of the Kell Hounds mercenary unit, are riding high. First, they deposed the crime lord that had been ruling the mercenary world of Galatea, then they saved that planet again from a religious zealot who tried to starve the government into submitting to his new theocracy. Along the way, they assembled a crack team of ’Mech pilots, techs, and ground forces that will make the Kell Hounds one of the elite mercenary units of the Inner Sphere.

So when the Archon hires the Hounds to provide security for war games with Prince Ian Davion’s forces in a show of combined strength between the Lyran Commonwealth and the Federated Suns, Morgan thinks it’s a chance to relax while getting to know the mercurial leader of the Federated Suns. But when a powerful groups of raiders lands on Zavijava, he finds himself facing two threats—stopping the invaders from wrecking the planet while protecting Prince Davion. Trouble is, before the fighting is over, Morgan may have to make a very dangerous choice…with the possible fate of two Great Houses lying in the balance…