[18:01] <@Habeas2> Welcome to another exciting monthly BattleChat day. This is the first chat of the day. CHat runs 1 hour, after which I gotta run an errand, so let’s begin. (Usual rules apply. If you don’t know them…. you’re on your own.)
[18:02] <@Habeas2> That said, floor’s open to questions. Welcome one and all!

[18:02] On the GenCon event schedule, there’s a listing for this: „Play in the conclusion of this year’s story arc featuring the Fall of Terra: a massive fracas finds the Republic challenged by Alaric Ward and his Clan Wolf forces.“ Will that event include preview Record Sheets for some of the new Wolf Empire and Republic of the Sphere units from TRO:3145?
[18:03] Or to be more specific, the PDF releases for TRO:3145 Clans and Republic.
[18:05] <@Habeas2> Nerroth – Yes. Or at least, it should. As long as it doesn’t get hung up in the concurrent production of the TRO itself.
[18:05] Are there any units in particular that one might expect to see, like the Warwolf or one of the Colossi; or is that still to be decided?
[18:07] <@Habeas2> Nerroth – Again, most likely, but cannot guarantee it absolutely.
[18:10] <@Habeas2> Nerroth – Still to be decided. One key factor we need to consider is that we’d need miniatures for said units ready in time for GenCon. That’s really iffy.

[18:04] What news is there about Gencon that you feel fit to share?
[18:07] <@Habeas2> JimdiGriz – GenCon will be in August. We have a big table evnt going on. Shadowrun is gonna have a lot of product, and maybe BattleTech will too. 😉

[18:59] One last question for now: Will the outcome of the „Fall of Terra“ event at GenCon have an impact on the storyline to be presented in the ilClan sourcebook?
[19:00] <@Habeas2> Nerroth – Yup.

[18:08] <Circinus_Enquirer> What’s the word on ultra-premium extra special six-siders this convention season? (NARC beacons hidden inside?)
[18:13] <@Habeas2> Circinus_Enquirer – We have secretly replaced some of the limited edition faction dice we’ll be selling this year with LSD-laced sugar cubes. We’ll see who notices the difference.

[18:14] Wont Replacing real dice with the Sugar Cubes just cause clan players to buy out all available dice. Ohh I see what you did there… Evil Genius

[18:13] Will there be dice in larger quantities this year, or limits on how many you can buy?
[18:25] <@Habeas2> JimDiGriz – We’ll need to wait and see about the dice. The fact is, we tend to purchase a lot for both Origins and GenCon, so if we sell tons at Origins, there’s usually little left for GenCon. (And when someone comes in and buys the entire bucket within 10 mionutes of opening doors on the first con day, well….)

[18:03] <Circinus_Enquirer> First off – thanks for giving us TRO 3145 CapCon. I love the current art direction. Is the shift in art (say, compared to the lighter-hued, more rounded Project Phoenix art) a conscious decision by Brent Evans and Ray Arrastia, or just a result of evolving styles and new talent coming onboard?
[18:06] <@Habeas2> Circinus_Enquirer – A little of both. We have some artists who really seem attached to that style, which we appreciate becuase it emphasizes that we’re not an anime-style universe, but a clunky big bot type of setting, but it’s ALSO fitting with the Dark Age aesthetics laid down by WizKids many moons ago.

[18:04] What do you think of the reception TRO3145 has gotten so far? And are sales where you wanted/expected them to be?
[18:08] <@Habeas2> Damage – I have not actually looked at the sales figures on TRO 3145 yet, but response seems pretty positive.
[18:09] <@Habeas2> Damage – (In my ear at this moment, Paul Sjardijn says he’s less than impressed by the public reaction to TRO 3145, and wishes you people would buy more of our stuff.)

[18:10] A forum I was talking with had some reservations about mechs equipped with the TSEMP coming out before the rules for it were established, is that right?
[18:19] <@Habeas2> Oswald – Yes, we have now seen some units come out that have 3145 tech, and no rules for their use yet in play. When FM: 3145 comes out, those rules will appear in that source. We felt it was more convenient that way than reprinting the rules over and over again with every TRO release.

[18:10] What is the TSEMP? EMP?
[18:21] <@Habeas2> JimdiGriz – TSEMP stands for Tight Stream Electromagnetic Pulse. It is effectively a wireless Taser-like weapon.
[18:21] <@Habeas2> JimDiGriz – (Paul wants me to point out that an early rendition of the rules caused the TSEMP to hit over 2100 points in BV2)
[18:21] <@Habeas2> (We fixed that.)
[18:22] Do you remember how many different TSEMP versions with different BVs there were? (okay, I know the answer, but don’t dare to say ;))
[18:34] <@Habeas2> DarkISI – Too many for me to comfortably name without curling into the fetal position and weeping blood.
[18:35] The feeling is mutual
[18:36] <@Habeas2> JimDiGriz – The TSEMP basically works very much like an energy-based Taser (now). The original version was modeled on the Centurion Weapon System, but had a hideously effective range that made it a walking God. We decided the munchkins didn’t deserve such perfection.
[18:37] And now you know, why the original version had 2100BV 😉

[18:12] Speaking of the Colossi: assuming they will be in TRO:3145 Republic of the Sphere, will there „only“ be the four known variants from MW:DA/AoD (Zeus, Hera, Hades, and Poseidon), or is there the possibility of further Colossi variants being added in that volume?
[18:22] <@Habeas2> Nerroth – At this time, there are actually only two Colossi Tripods. One is an Omni.

[18:24] So, would the four known variants be covered by alternate configurations of the two base chasses being developed?
[18:36] <@Habeas2> Nerroth – On those variant of the Superheavy Tripods, yes.

[18:06] Will we learn the identity / identities of the force that took out the HPG network during the current arc, or will that have to wait for the next arc / next year?
[18:11] <@Habeas2> SpaceCowboy1701 – That is yet to be revealed, and as you know, I can’t really talk much about events beyond this year’s product.

[18:09] What kind of authority does the IlClan have over the other Clans? How likely would the other Clans be to follow it?
[18:16] <@Habeas2> JimdiGriz – Well, if the Clans put any stock into the whole reason they chose to come to the Inner Sphere at all, the ilClan is supposed to be the leading Clan from that point onward, and all Clans should bow to its authority. But, as we know, Clans aren’t all too big on following their own rules if they can shoot back at them.

[18:19] <Circinus_Enquirer> The old Clans sourcebooks made some cryptic references to the ilClan assuming sole control over the „caste members who operated independently of any Clan.“ The only people we’ve seen who meet that description is the Ebon Keshik. Are there „pan-Clan“ civilians too, and if so, what do they do?
[18:29] <@Habeas2> Circinus_Enquirer – You may have noticed we don’t really talk about Clanners operating outside of Clans who aren’t Dark Caste any more. Everyone is technically subservient to one Caln or another. The closest they legally get to operating across Clan lines is the merchant caste. All of those would technically fall under an ilClan’s rule (again, if the Clans honor the reasons they even came here).

[18:09] Besides the hot-awaited next faction-related TRO 3145 (should be Kurita IIRC the last Battlechat) can you tell us more about the upcoming releases?
[18:18] <@Habeas2> Gaiiten – We still have Field Manual: 3145 waiting in the wings (which will include the rules for all that new tech we’re seeing in the 3145 TROs). We also have the entire 2765 Field Report series waiting for art and layout (which will also give people a look at the remaining WarShips of the Star League day). I think we have a bunch more PDF mapsheets to go. There’s more Turning Points waiting. More XTRs (but TRO 3145 has kind of sidelined those for obvious reasons)….

[18:19] question about AS: the unit cards will be different than the quick-strike cards? not only aesthetically but rule-wise too
[18:31] <@Habeas2> Bravebird – Not significantly. There are some minor tweaks happening–mostly just to add a designator for unit types–but the Quick-Strike cards should be accurate (though I should note that if you have a Quick-Strike card that measures Move in MPs, they translate at 1 MP = 2″ in Alpha Strike).

[18:58] Will any of the WarShips set for the FR:2765 Periphery be models that hd fought in the Reunification War? I gather that attempting to re-create some of the battles on the Taurian front might require additional WarShip classes to be viable.
[18:58] <@Habeas2> Nerroth – That’s possible.

[18:38] One of the handy things about FM:3085 was the opportunity it provided to present the early Republic in a kind of „mini-Handbook“ format, where such detail might not have otherwise ben able to go. Will FM:3145 have a similarly extensive section for Fortress Republic, as it has evolved in the decade since the walls went up?
[18:49] <@Habeas2> Nerroth – FM: 3145 returns to a largely military-only focus. Era Report: 3145 covers the historical/nonmilitary side of things with updated RPG-driven faction rules. Between the two, you should find everything you need to know.

[18:51] The issue there I might note is that ER:3145 is written from the perspective of the Remnant, so gives away little on what has been happening inside the Fortress itself. If FM:3145 won’t add more details on that front, is there anywhere else where such data might one day go?
[18:52] <@Habeas2> Nerroth – FM: 3145 will give us a look behind the curtain. That’s all I can really say for now on that.

[18:31] Herb, you mentioned that the FR: 2765 Series is going to introduce the last unknown SL era warships. Besides them there are still some early Clan designs unknown. Please consider to include them in other releases.
[18:43] <@Habeas2> Gaiiten – If we find a convenient reason to discuss any interim-era Clan WarShips, we will, but there seem to be very, very few of those, and few opportunities on the horizon.

[18:46] I may recommend an XTRO: Golden Century, at least I can remember 6 Clan-designs who were produced in very small number or only prototypes.
[18:49] <@Habeas2> Gaiiten – We’ll consider it.

[18:48] Do you plan to publish something from the Operational Turning Points series (from current era)? Some episode from Capellan Crusades or something?
[18:51] <@Habeas2> Martian – At some point. Of course, the Capellan Cursades, Victoria War, and Second COmbine-Dominion War are all subjects of an upcoming Historical, so Turning Points won’t be so necessary for those fights.

[18:51] <Circinus_Enquirer> Looking at the HTP: New Dallas Tracks, were the Rattler Mk I mobile structures a Terra-only thing (for the Reagan SDS) or were they standard at most Castle Brians in the Home Ring?
[18:53] <@Habeas2> Cricinus_Enquirer – They were likely deployed wherever they were needed, but I doubt they ever became a standard item. You just cannot call a mobile structure „standard“ in any way, shape, or form…. 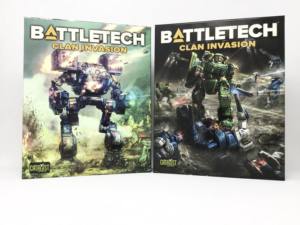 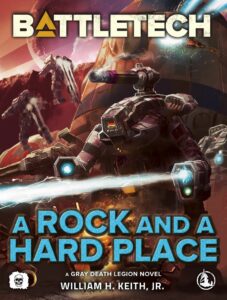 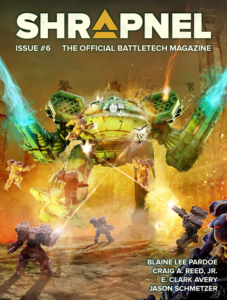 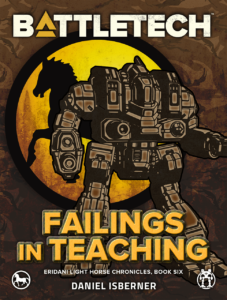 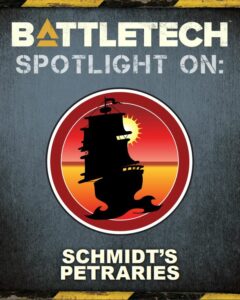 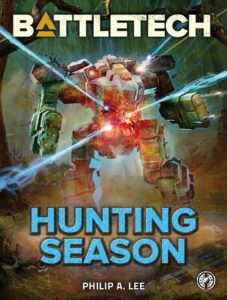