Fortress Republic:
<InigoMontoya>: Was the technology behind Fortress Republic fully fleshed out, or something Wizkids did that you had to scramble to make fit?
<Habeas2>: InigoMontoya – Nope.
Herb’s a proud papa:
<Kamose>: What current or upcoming product are you personally proud of?
<Kamose>: I mean, MOST proud of.
<Habeas2>: Kamose – Not to sound pedantic, but I’m personally proud of ALL of them. I see BattleTech products as children, and it’s kind of unfair to pick and choose when each is basically a labor of love.

Pirates:
<Terminax>: Can we get more pirates plz?
<Habeas2>: Terminax – I’m sorry. Your request infringes on future material beyond the presently announced story line, and I cannot discuss that item further.
<Terminax>: Okay.
Catgirls:
<Kamas>: Herb: Your thoughts on catgirls?
<Habeas2>: Kamas – Depends on the catgirl.
<Kamas>: Okay, followup. Any catgirls you like?
<Habeas2>: Kamas – Yup.
and Bannon’s Raiders
<Deadborder>: Herb, are we ever going to find out what happened to Bannson’s Raiders? The end of the ‚Loyalty‘ short kind of left them hanging
<Habeas2>: Deadborder – That’s a maybe.
<Deadborder>: Thanks!

Con Exclusives:
<John_Hawk>: Herb, is there any word on planned exclusives for the Cons this year?
<Habeas2>: John_Hawk – We’re still discussing that.
Upcoming XTROs:
<BigAl>: Any new XTROs that will be coming out soon?
<Habeas2>: BigAl – „Soon“ is hard to say. We have 2 more Primitives, 1 Star League, and 2 Jihad/Dark Age era XTRs in the hopper, plus about 3 Succession Wars XTRs in progress.
<Deadborder>: Can you say which TRO we’ll see the Raider ICE BattleMech in?
<Habeas2>: Deadborder – Probably an XTR.
<Deadborder>: Cool beans. I love that thing

Master’s and Minions Game:
<Circinus_Enquirer>: At the Masters and Minions game, do you plan on once more running an unkillable zombie ‚Mech that keeps you in the game until 3 AM?
<Habeas2>: Circinus_Enquirer – I didn’t even run one of those before. This year, I’m honestly thinking of fielding two COM-2D Commandos.

New BV:
<Corrinald>: How is the new BV system coming along? Are you still planning to replace the current BV system with it?
<Habeas2>: Corrinald – We put the brakes on the new BV system to see how well received the latest errata holds. If we redo BV, after all, we’ll even need to rework Alpha Strike.
<Corrinald>: Oh, okay, I didn’t realize there was new BV errata.
<Habeas2>: Corrinald – Yes, there was a very extensive TechManual errata released. Plans are to issue a revised TM in PDF-only format later this year.
<Corrinald>: Thank you. I will have to look into it.

Turing Points:
<Kamas>: How many Turning Points are planned for the 3145 era?
<Habeas2>: Kamas – At this time, there are no Turning Points planned for the 3145 era.
Monopoly and Capellan Expansionism:
<Circinus_Enquirer>: If Daoshen Liao conquers both Park Place and Boardwalk, does he get to build hotels?
<Habeas2>: Circinus_Enquirer – Cat knows he’ll TRY, but the ethnically-Davion contractors there will give it their usual shitty craftsmanship….
<John_Hawk>: Well, they might not, if he’d actually share the plans with them, rather than asking them to take it on blind faith. ..
<John_Hawk>: Daoshen Liao, that is.
3250:
<John_Hawk>: Will we see anything of 3250 this year, or will that wait until 2014?
<Habeas2>: John_Hawk – I’m afraid your request infringes on material I am presently not at liberty to discuss and so I cannot respond to that item.
<John_Hawk>: And, I understand about the new products.

Map packs:
<Circinus_Enquirer>: Is the maptile product series planned to continue?
<Habeas2>: Circinus_Enquirer – Yup.
<John_Hawk>: Oh, that’s a good question. Are there any chances of new maps in the future, rather than reprints, even in map pack form, of the old ones?
<Habeas2>: John_Hawk – That is unknown at this time. The existing maps, after all, are legion, and we’re not pumping that many out at a time here.
<Trboturtle>: are the PDF mapsheets going to continue?
<Habeas2>: Trboturtle – Yes.

Future of the Federated Suns:
<Kamas>: Are the Federated Suns going to have much of a comeback before we get to the timeskip, or will the 3145 borders be the new ’status quo‘
<Kamas>: (this is only a question pertaining to the immediate future of the DA era)
<Habeas2>: Kamas – I’m afraid your request infringes on material I am presently not at liberty to discuss and so I cannot respond to that item.
<Terminax>: New Avalon or BUST!!!
Borders:
<Deadborder>: Was there any manical laughter when drawing up the 3145 FedSuns borders?
<Habeas2>: Deadborder – Ohyeah.
Gaming Industry and BattleTech Mechanics/Teaching dicusion:
<Circinus_Enquirer>: What developments in the gaming industry over the last 20 years have surprised you the most?
<Habeas2>: Cricinus_Enquirer – Hmmm. I don’t know that any of it really surprised me. I suppose the fact that BT found it possible to outlast Dark Age with 30-year old game mechanics could be a surprise, but even then it clearly needs an upgrade to stay competitive.
<OrinThomas>: the 30 year old mechanics are a blessing and a curse. Great because you don’t have to keep learning new rules every couple of years though
<OrinThomas>: I guess a drawback is that it takes a while to play the game – it’s not fast
<Habeas2>: OrinThomas – Exactly, and that makes for a roadblock to new players. I’ve met many that wished they had time to learn, but hours for a single lance-on-lance fight is too much investment for people who want to play other games as well.
<OrinThomas>: yeah – been trying to get to a point where I can intro it to my 10 year old
<Habeas2>: OrinThomas – Save it for Alpha Strike?
<Deadborder>: I’ve been teaching a couple of my friends BT. It’s been… amusing
<OrinThomas>: maybe – though BattleTech also has the advantage of being great at learning probability
<Corrinald>: This is why I’m excited for Alpha Strike. I want to introduce Quick Strike to my gaming group. We’ve been playing Battletech for 15+ years, but it’s very hard to find time to all get together.
<Deadborder>: One of them had his Enforcer fall over and TAC its AC ammo early in the game. I patted him on the back and said „That’s the Battletech Experience“. He laughed
<Circinus_Enquirer>: Building on an earlier question – what’s been the most distressing development in the gaming industry you’ve seen in the last 20 years, and what’s been the most positive?
<Habeas2>: Circinus_Enquirer – I think anyone would by lying if they told you computer and video games didn’t scare the life out of us. Even though they’re different media, electronic games tend to compete for the same free hours as tabletop games. That they now reach a sophistication where you can get instant gratification even for a game as complex and deep as BT tends to make us leery of our future,
<Habeas2>: Ciricnus_Enquirer – At the same time, though, all forms of gaming have reached a point where they’re considered much more socially acceptable than ever before. It’s harder and harder to find someone who hasn’t at least had some experience with tabeltop wargames and RPGs.
<Terminax>: I run a new player table every month at our LGS and we clock it in under two hours for six players.
<OrinThomas>: wow – Terminax
<Circinus_Enquirer>: (One trick is to give everyone a Hollander – 15 point gun, thin armor, short game…)
<Terminax>: It helps that we focus on just the basics, keep it between lights and mediums and I focus on team objectives rather than just the grind.
April Fool’s Thread:
<Youngblood>: Herb, would you say my April Fool’s thread brought all the fanboys to the yard, and was generally better than yours–ahem, I mean, better than the TRO: 1945 thread?
<Habeas2>: Youngblood – What thread?
<Youngblood>: Exactly!

Combine Civil Wars:
<Kamas>: Okay, side question on the Kuritas – is their current leadership, namely the Coordinator-Kanrei-ISF in good agreement with each other or is there animosity and clashes between them?
<Habeas2>: Kamas – The Dracs have a way of hiding their civil wars from the universe at large. The current leadership is no different.
Caleb vs. Julian:
<Circinus_Enquirer>: I’ve got to say, I really enjoyed the twist on the foreshadowed „Caleb vs. Julian“ conflict that was foreshadowed in the WizKids novels – sidestepped in order to showcase the legendary political treachery of the Ravens. It made a much better addition to the storyline than ye olde civil war.
<Habeas2>: Circinus_Enquirer – Thanks.

Construction Software:
<mib_1o0wpq>: last question: is CGL doing something about the lack of support software for units construction? even our best option, SSW, is outdated and is missing rules for other units besides mechs and vehicles
<Habeas2>: Mib_1o0wpq – We are exploring numerous options. The issues you see are identical to those we face every time we print a product, after all.
<Youngblood>: Ew, ew, an electronic rights question.
Conventions:
<Terminax>: Will CGL or Demo Agents get out to any Canadian conventions this year?
<Habeas2>: Terminax – That’s kind of up to them. I have a hands off policy when it comes to Demo Team activities.

3145 new tech:
<Pa_Weasley>: ER 3145 introduce new armor and other toys. Any word on where we’ll be seeing the rules for those?
<Habeas2>: Pa_Weasley – Field Manual: 3145
ATOW and controlled substances:
<Circinus_Enquirer>: And now out of left field: There are two BattleTech-universe drugs not found on the AToW charts – MindMASC (Dragons of Despair) and Brace (Pal Sandoval stories). Any suggestions as to their general categories for AToW simulation?
<Habeas2>: Circinus_Enquirer – Not without more details on what they’re supposed to do from the authors who created them.
<Circinus_Enquirer>: Fair enough. Snoooort! Hmmm. Yellow…
Hexpacks:
<Corrinald>: Is the next Hexpack coming out this year?
<Habeas2>: Corrinald – Yes, 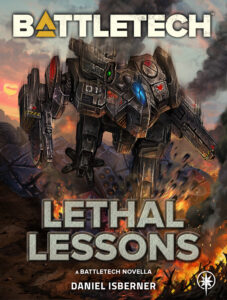