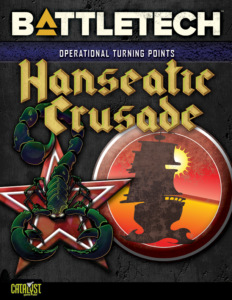 Tensions simmered between the Hanseatic League and the new Scorpion Empire for decades before the Hansa lit the spark that led to war. The Khan of Clan Goliath Scorpion knew a simple punitive expedition would be a waste of resources. This would not be a war of reprisal. It would be an all-out crusade for control of Hansa territory. Superior Clan technology pitted against superior numbers of Hansa troops. In such a war, can there truly be a victor? Would two nations be shattered in the conflict, or would a single, new power rise from the ruins?

Operational Turning Points: Hanseatic Crusade opens up the battle for players to join in the fight using the successful Turning Points PDF-exclusive format. This campaign series uses the Chaos Campaign rules and gives players the option of fighting individual Missions and Touchpoints, following a campaign arc, and inserting it into their own campaigns. This PDF includes detailed information on several of the worlds affected by the Scorpion Empire assault, a rundown of the forces involved in the conflict, an overview of the historical campaign, and several tools and tracks that players can use to run characters and battles from this time period. Only the players’ imaginations are the limits.