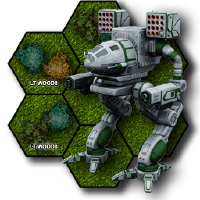 Megamek
Just some bug fixes. But we are trying to show Princess the importance of mercy and stop her Smoke Jaguar tendencies. Thanks to Deadborder we have around 116 new mech sprites. Some you want see for a couple of months till moratoriums are done on the Rec Guides and Golden Century

MegaMekLab
Bug fixes lots of bug fixes and the implementation of ARTS bays in this release.

MekHQ.
Yep, you guessed it..bug releases. But we did add the battle damage decals to show on the MekHQ sprites.

Also a reminder to drop into the Slack channel to meet other players and harass the devs that drop in and out. If Slack isn’t your thing check out these Discords with Megamek channels – Everything BattleTech and Classic BattleTech

**FOR MAC USERS**
There isn’t a Mac release and you’ll have to use the Unix release. We are having issues with the Gradle packaging scripts and various security settings in MacOS.  We are working on the issue and have no ETA for a fix.

Another reminder when moving between versions:
1)   Make backups of your campaigns and customs.
2)   Always treat each release as a stand alone release and only copy your data forward from older versions.

There is a good chance you’ll have issues in MekHQ with unit name changes.  If you get errors loading your campaign as result of unit name errors please see this post.

Name Issues with units
The change log below lists all the changes in this release from the previous stable.