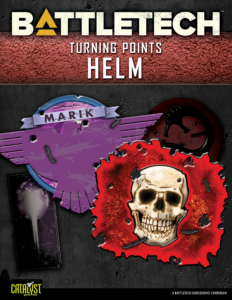 The Gray Death Legion: Mercenaries betrayed by their employer and betrayed from within. Mariks and ComStar oppose them. Can Grayson Carlyle lead his command out of the trap that has ensnared them? Only quick, decisive action and determination will see them survive overwhelming odds.

Helm: A world of glaciers, tundra, rock-filled deserts, barren seas, and an ancient Star League secret. That secret could destroy the Legion and move humanity another step closer toward darkness. Or one step closer toward salvation. Helm and humanity’s future lay in the grasp of an outlawed mercenary unit.

Turning Points: Helm uses Chaos Campaign rules to give players the option of fighting individual battles or to follow a campaign arc. Included are a detailed map of the world of Helm, a run down of the forces involved, and scenario tracks recreating the battles on Helm.