The following ist a guest article from Joshua „NCKestrel“ Franklin. The developer behind Battletech: Battle of Tukayyid.

With BattleTech: Battle of Tukayyid coming out soon, I wanted to talk about one of the new items in this sourcebook. At least, something we haven’t had in a BattleTech sourcebook for quite some time. Campaign Maps.

At the heart of the Battle of Tukayyid are regions. Like map areas in a game of Risk, the players will fight for control of a region to determine where the campaign goes next. With the many different terrains of Tukayyid, I really wanted to emphasize how the battle was different in each of these areas.  And I really wanted maps to help demonstrate these differences, and their relationship to other regions.

The first step in this project, other than years of discussion of what a campaign book should be, was to research.  Chris Wheeler and Luke Robertson poured over 25 years of Tukayyid references and collected them to a reference document. One of these sources was the 25 Years of Art and Fiction book. This book had an unusual canon reference for us, in that it held a tiny global view of Tukayyid itself. 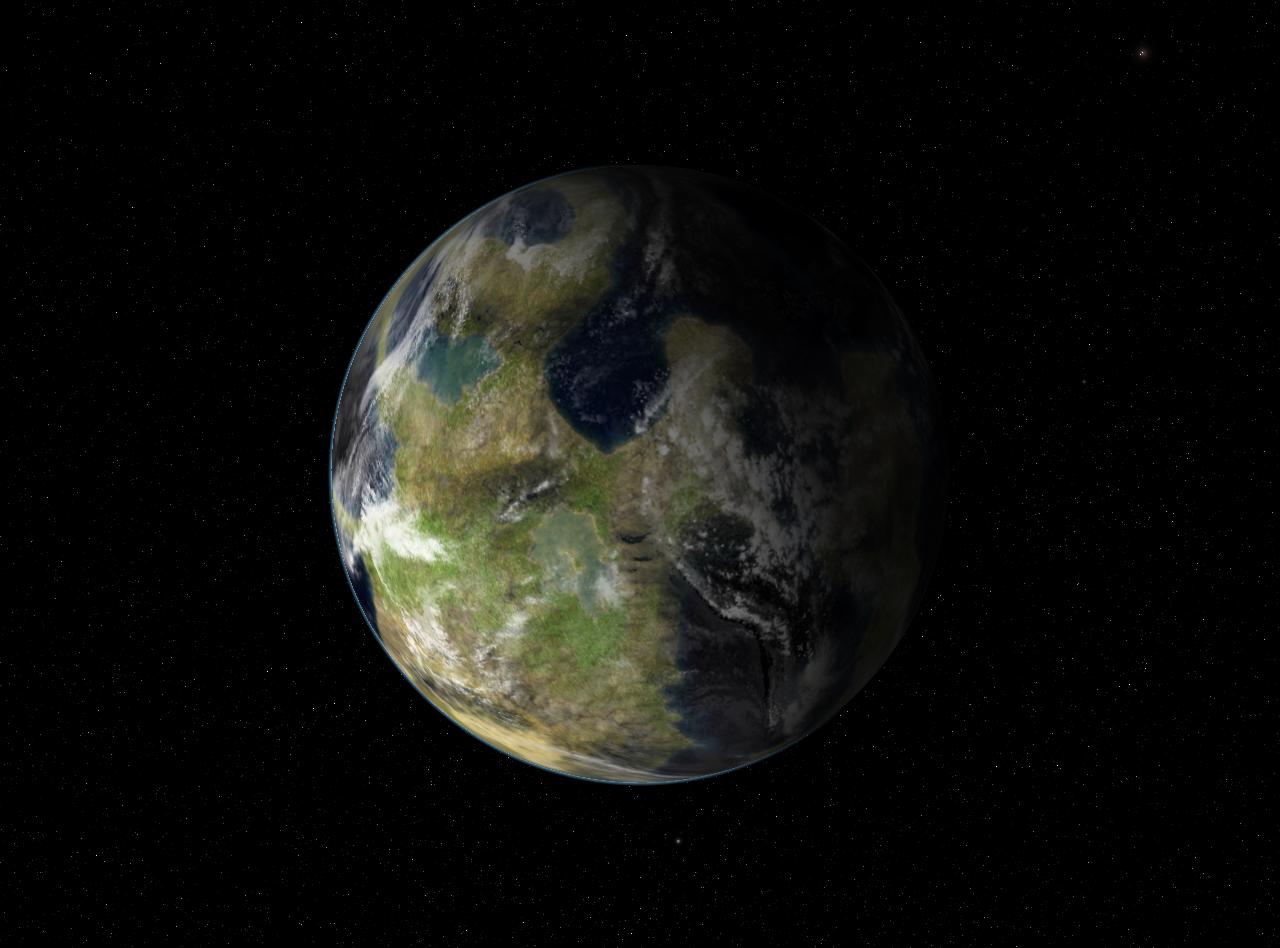 The global view in the 25 Years of Art and Fiction wasn’t all that useful, as it’s pretty tiny. But in asking around the “offices” about this global view, we were given a more detailed source map that was used to create the global view. It was quite a surprise to realize we already had a world map for Tukayyid.  We quickly began marked out known continents (Boreal) and naming previously unknown continents. As all the battles for Tukayyid took place on Boreal, I then began marking down possible locations for each Clan’s battle.

The reference document and world map were then handed off to each Clan’s campaign writer to work with describing and detailing each of their regions.

Our initial plan for Battle of Tukayyid’s production involved a change from normal procedure.  Generally writing is completed, and then art notes are created based on that writing.  We were looking to give the art team more time to work, so for this book we set a deadline that writers needed to give art notes a month before their writing was due. At that point, they should be several months in to writing and have a good idea of the framework and what they needed.

While each writer was required to turn in art notes for the campaign map in text, a couple turned in mocked up zoomed in maps of their campaign area.  Joel Steverson in particular went crazy with details…

Then came the waiting. Writing continued, finished up. There was coronavirus and other projects. Waiting on art. Playtesting and general review. It seemed like the project would take forever.  Then we got a deadline.  We had two weeks to get Tukayyid out the door.  Factcheck, editing, layout.  Boom, boom, and boom.

Dak, layout wizard, had some bad news on the world map front.  We can’t use the old world map. It was ancient, technology and process wise, and wouldn’t be usable for how we made world maps.  Quality wise it wasn’t up to our standards (especially as it was only meant for a tiny globe view, not a full page world map), and we’d have to start from scratch.  We worked together through several different options before selecting one that meet the general, already canon requirements of Tukayyid. 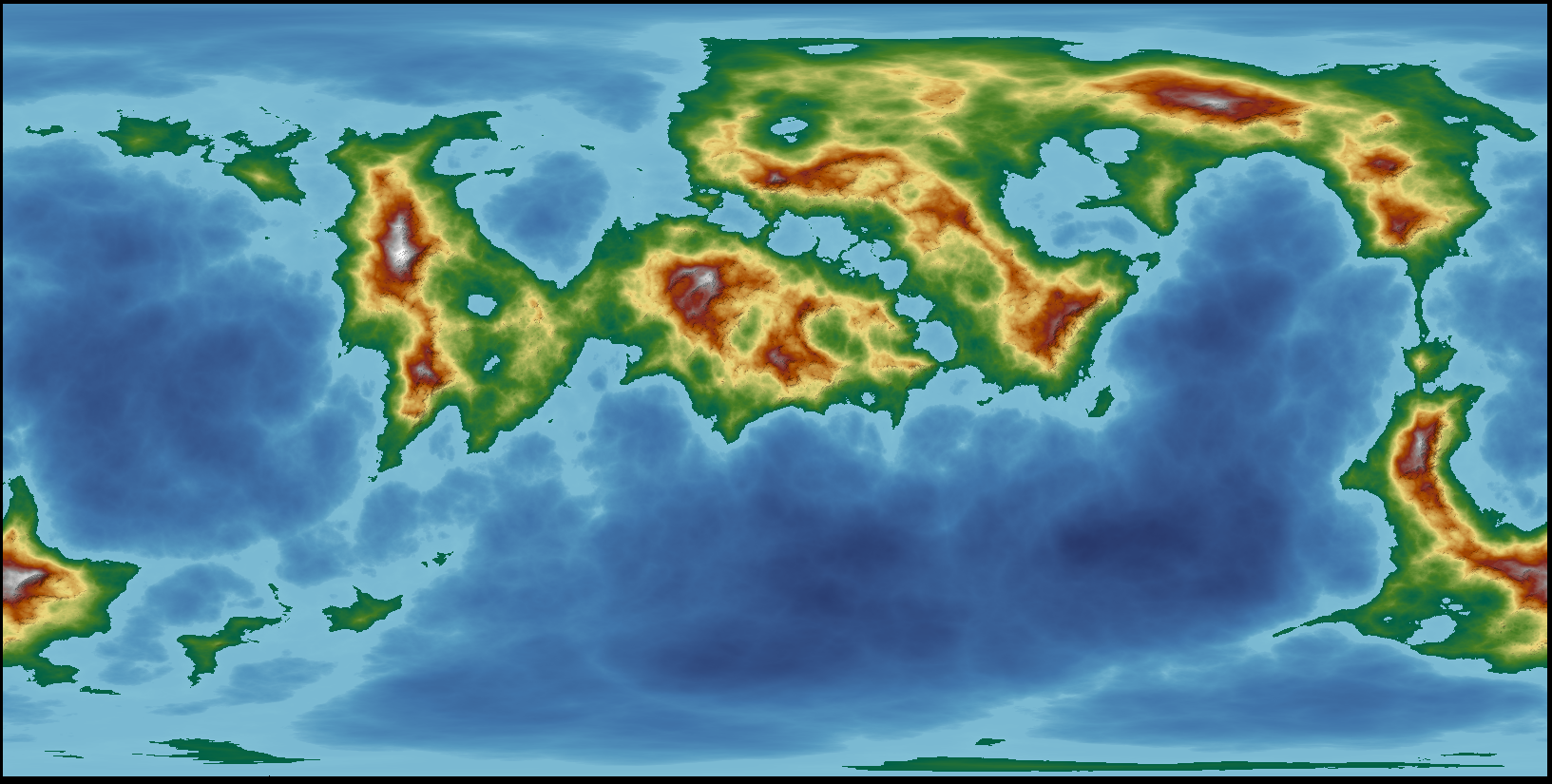 I quickly marked down the areas on the new world map that I thought would fit not only existing canon, but the new writeups that had been done based on the old world maps. Dak then began preparing an awesome world map for our book.

But there was more bad news. We had nobody making the campaign maps. It wasn’t a job anybody at Catalyst Game Labs had, we had a very short deadline coming fast, and there was nothing.  Fortunately, I’d been working on another map idea with Daniel Thomson (aka NeonKnight). I told him I had a mapping project, I begged him to do it, and I told him I needed seven maps in two weeks.  And I didn’t know yet if CGL would approve this or not.  I figure it was a crazy request.  But NeonKnight jumped on it.

First, he zoomed in the world map at the location we’d selected for the Smoke Jaguars. This campaign would be our test. Get one map done, get approval, and then we’d charge in the rest. 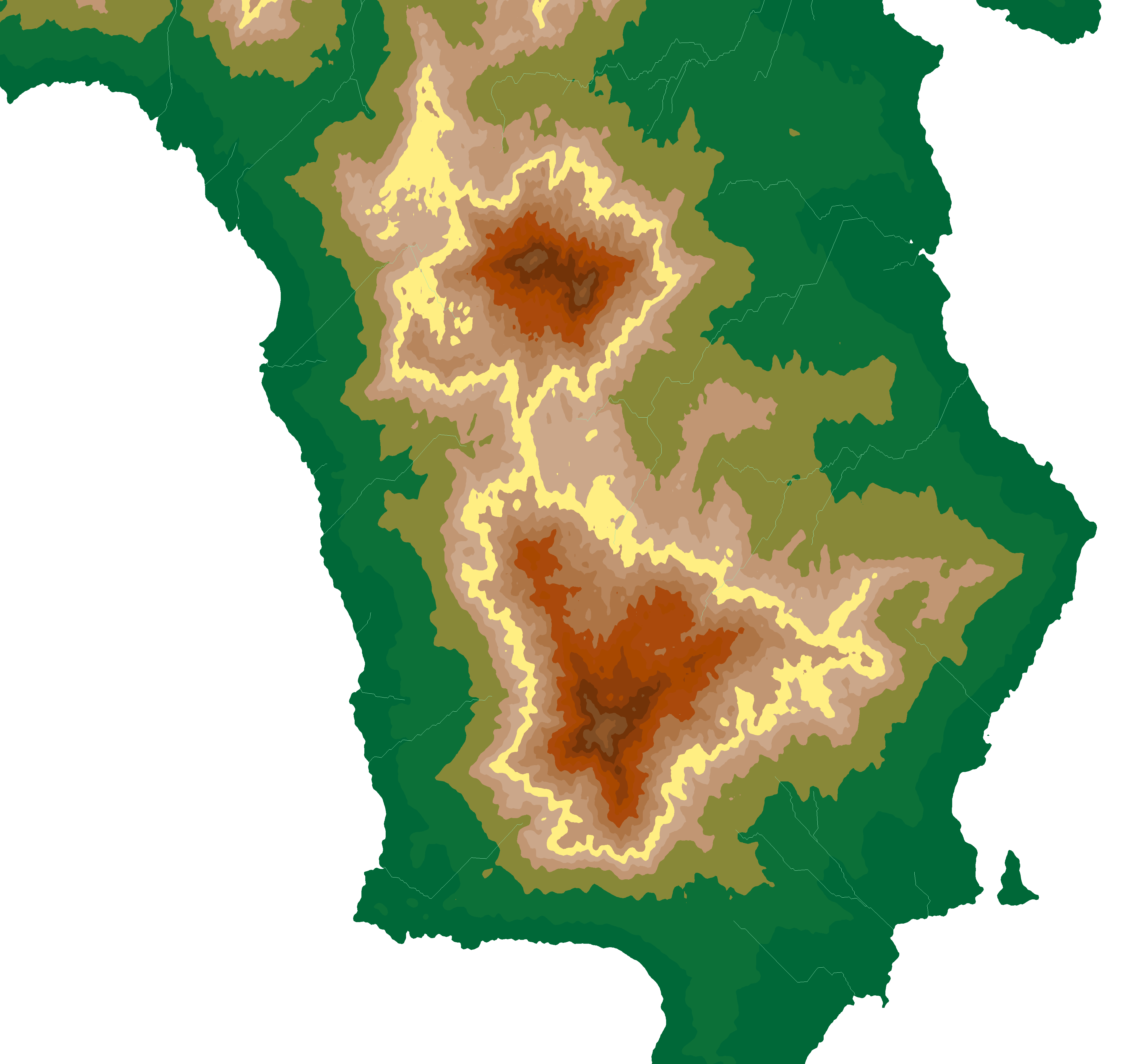 From the first zoom, we narrowed down what all we needed.  For the Smoke Jaguars, we need a port and two different mountain ranges.  That last bit led to a long conversation on how to make this all fit in a reasonable scale. 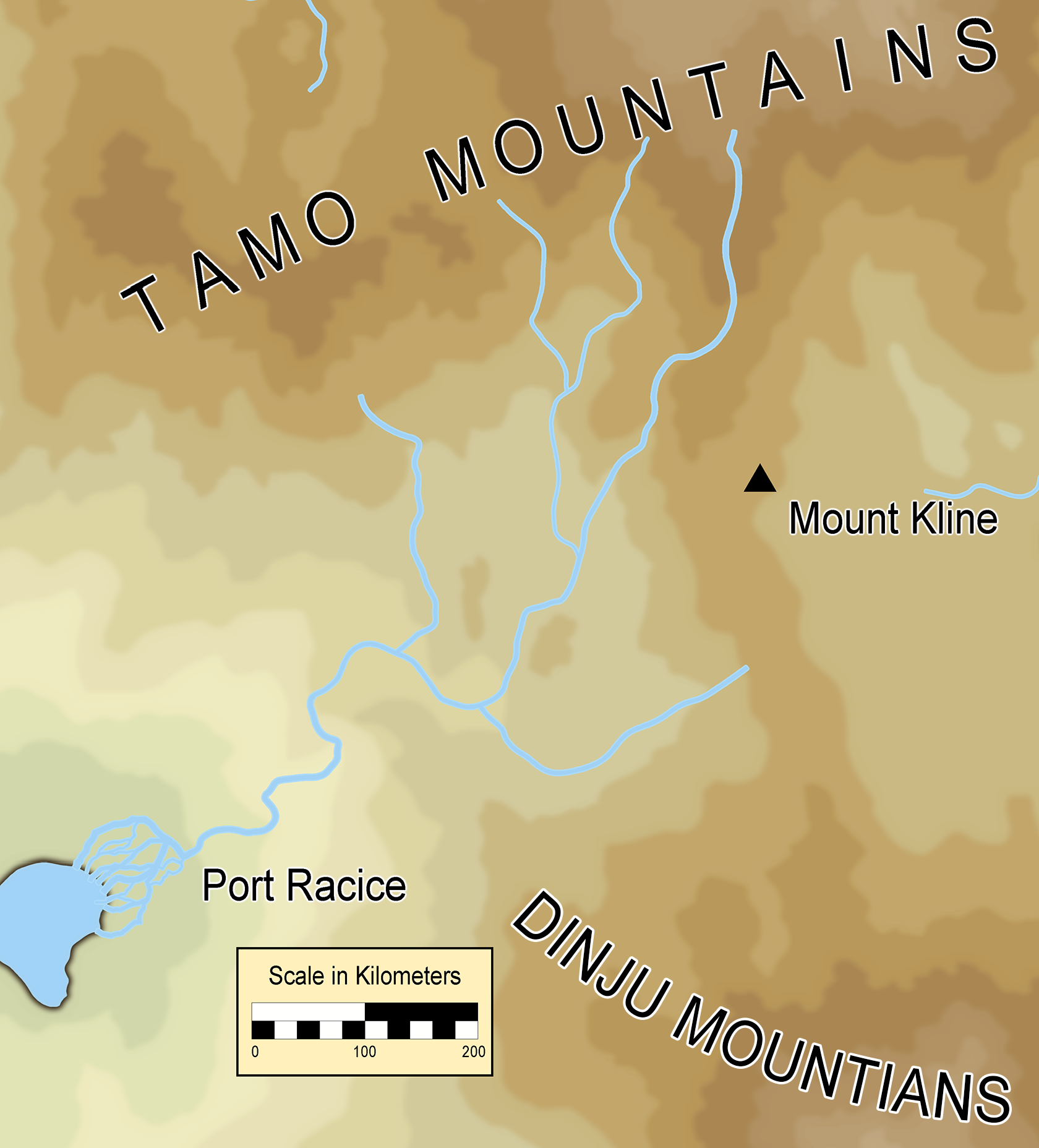 We then went back and forth on locations, and how to represent various features. Rather than just make requests, we started marking up the map to make sure we were talking about the same area each time. 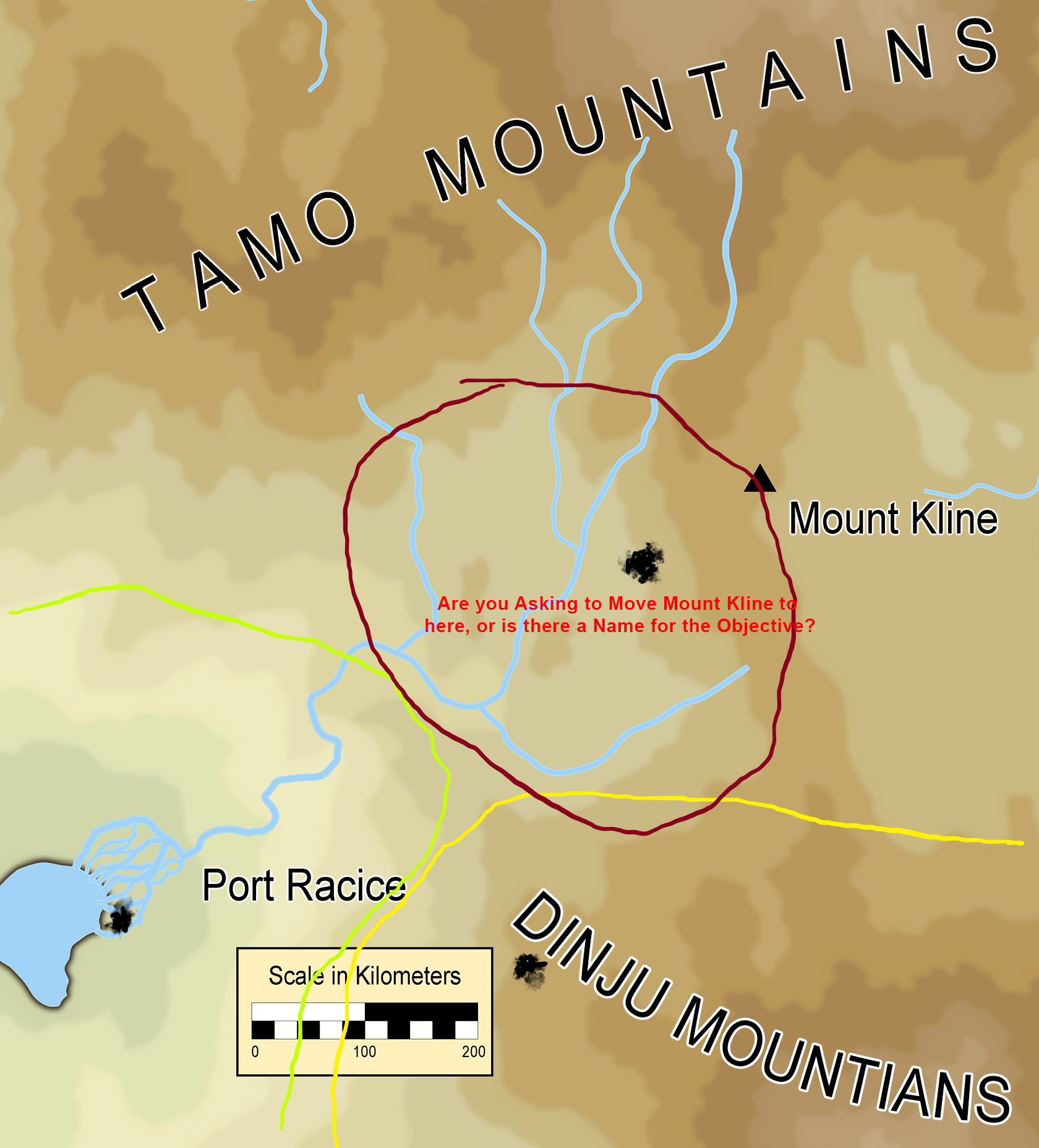 There were a million questions about scale.  Questions about what kind of map this would be (“Is this a topology map or not?) But we settled on one that we thought was worth showing to Ray to get approval on. 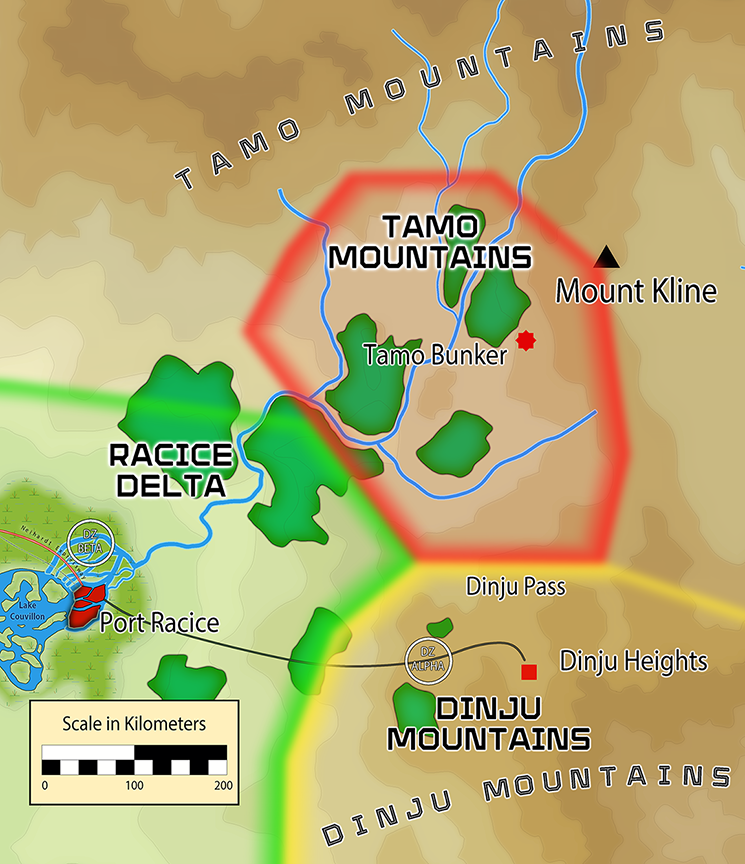 Ray’s response was to make it more realistic, to add more texture.  So we went back to the drawing board. Same map but try to tone down the ‘80s neon. Update fonts provided by Dak. Looked at modern maps for inspiration on lines and borders. And sent our new version to Ray for approval. 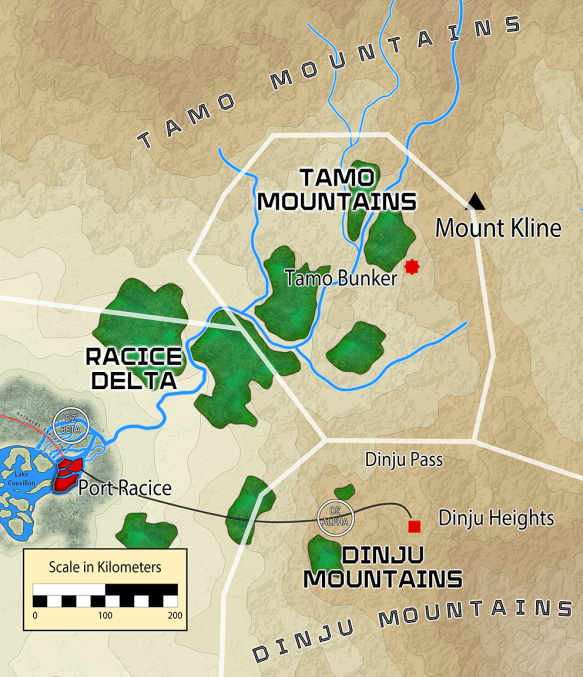 With time slipping, we moved ahead with more maps. We tried to improve the process, instead of waiting for NeonKnight to make a map and then I start requesting regions, towns, landing zones, etc I grabbed my digital “pen” and started mapping myself. 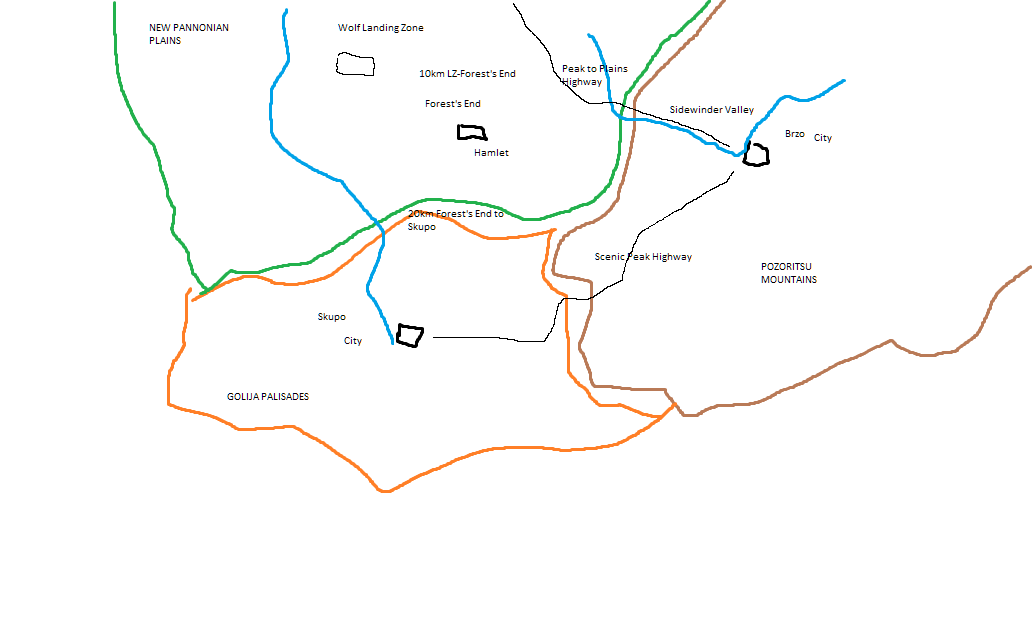 As we moved into the other regions, the graphics continued to evolve, but we continued to nitpick every detail. Where did canon take place, and is it represented on the map?  Here’s an example of us checking how the Kozice Valley mapsheet from MapPack: Battle of Tukayyid would fit on the campaign map. 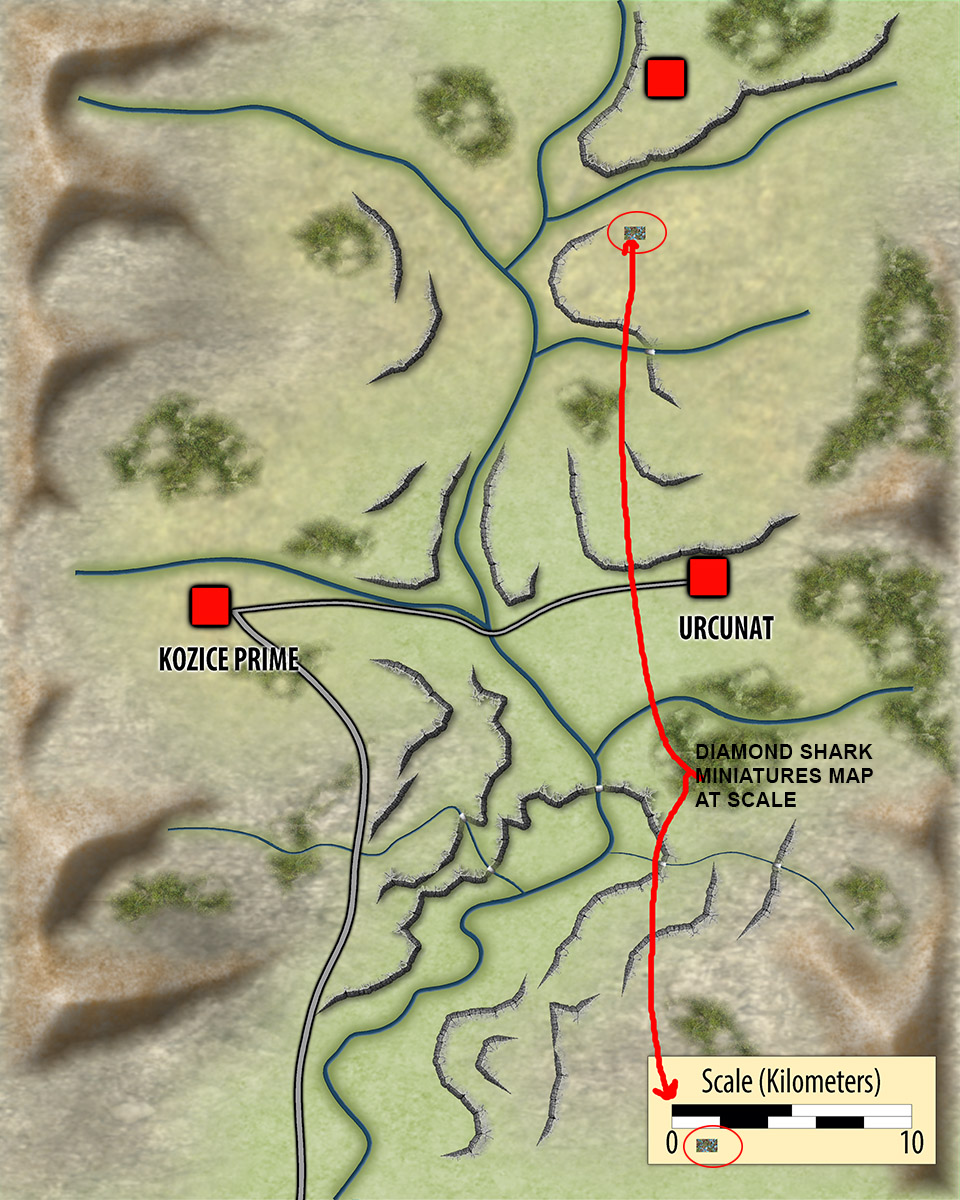 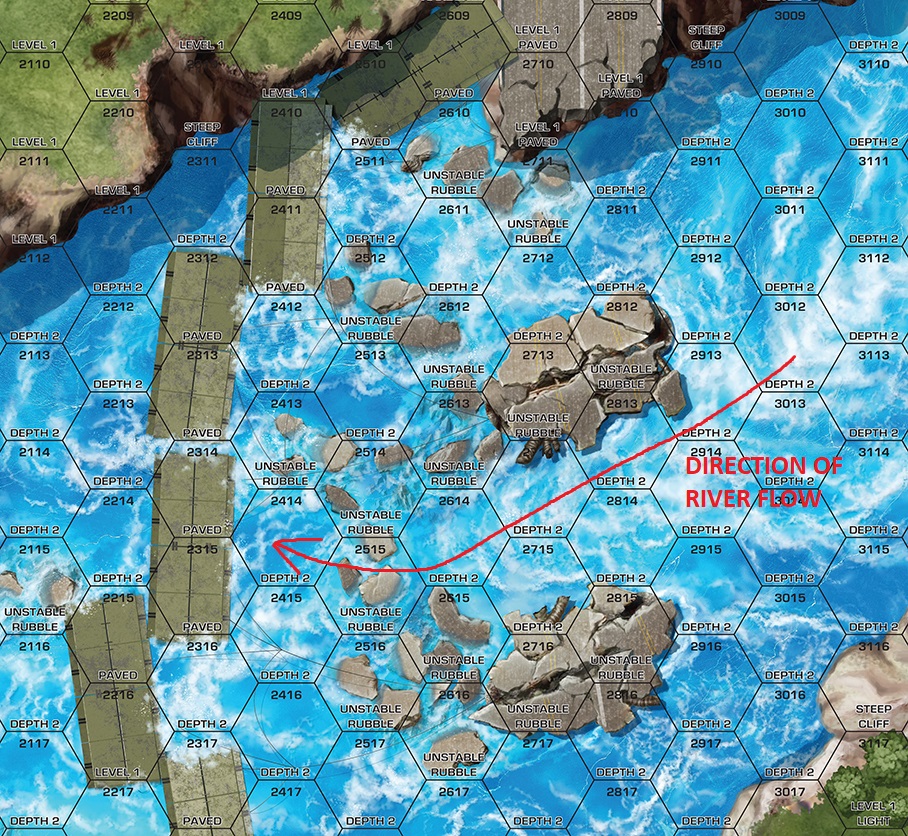 Or the before and after of me asking for more Holth Forest! 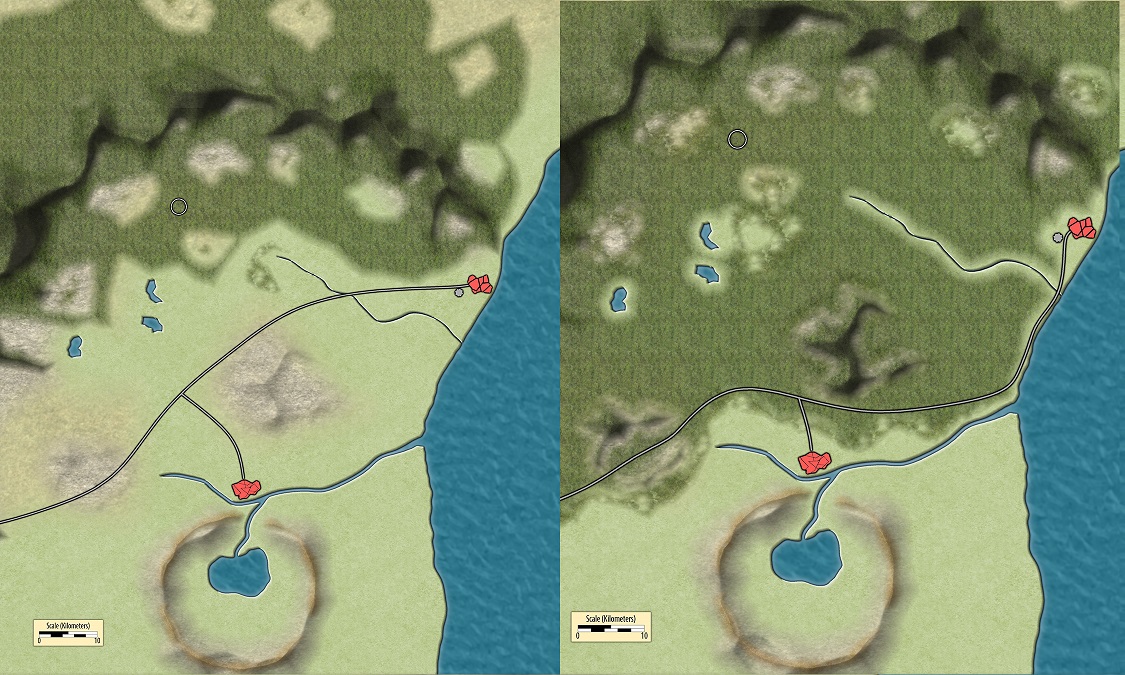 NeonKnight had completed all seven campaign maps!  With days to spare. I seriously will never ask how much sleep he got during that week.  Some things you just don’t want to know. 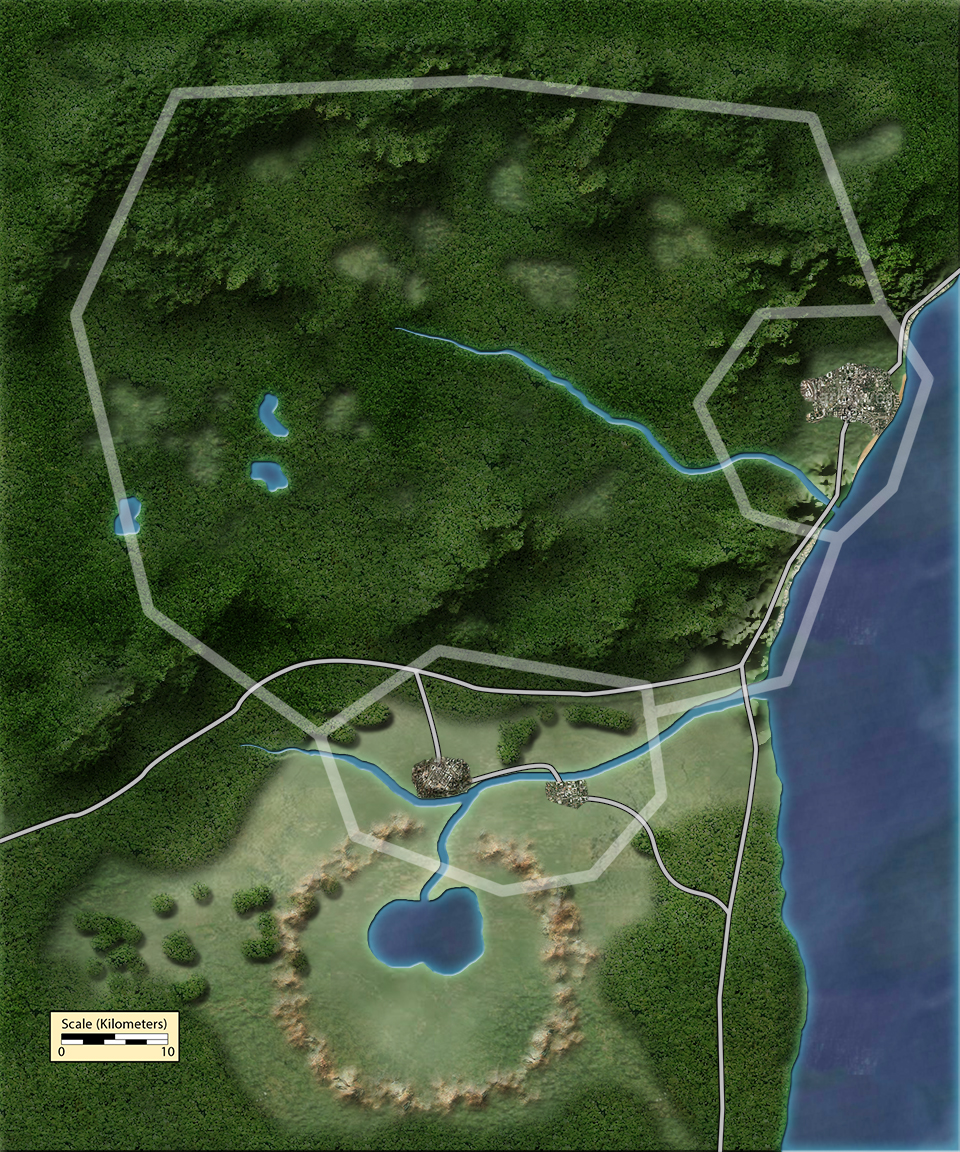 But there was one more step to go. Dak took two versions of each map from NeonKnight, one with labels and one without, and carefully updated the graphics one more time as he inserted them into the book. 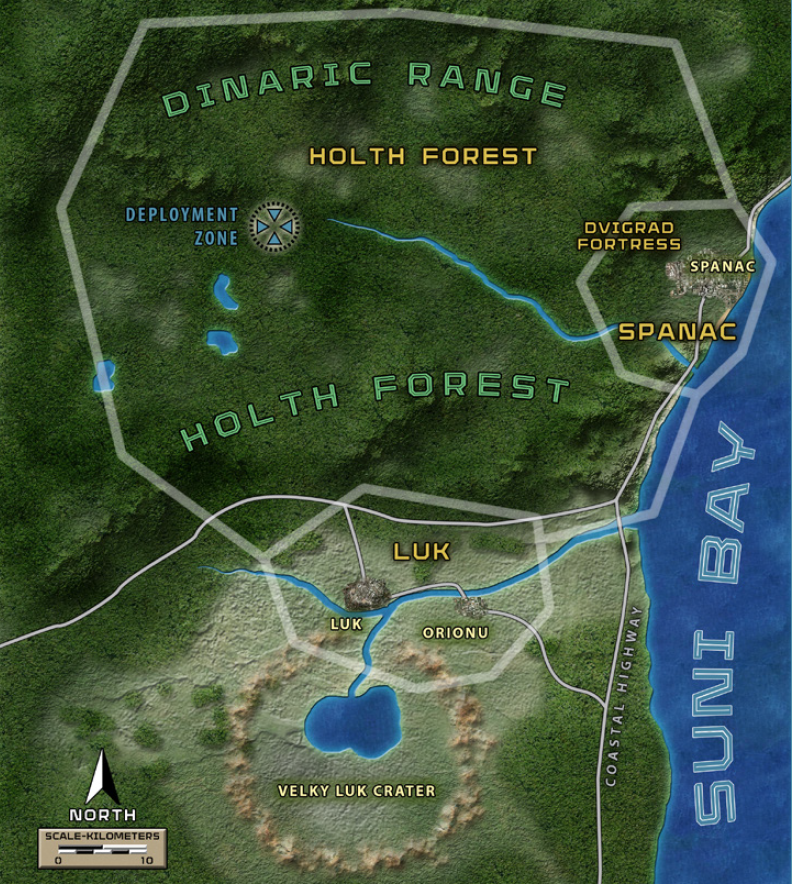 I hope everybody enjoys the Battle of Tukayyid. The campaign maps were a big item on my wish list for this book, and I’m so excited to see them appear. Despite the rush of the deadline, NeonKnight and Dak went above and beyond what I had even considered possible. Fortunately, many of you will get to see this book, as it is one of the stretch goals (in PDF) for the Clan Invasion kickstarter.