Flight of the Falcon und Blood of Kerenky – Jetzt verfügbar 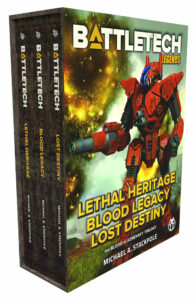 In the late 28th century, the Star League collapsed, and the Five Successor States were born. For the last three hundred years, these mortal enemies have fought over space, land, and politics, but now a new threat looms just outside the Inner Sphere.

The descendants of an old Star League general—the Clans—have returned from their long-ago exile to take what they believe is rightly theirs. They have been bred into the best military force humanity has ever seen. The Clans have come to conquer, and the Successor States must put aside their differences—or face total destruction.

Two decades after the events that nearly brought the Successor States to the brink of all-out war, the Great Houses exist in an uneasy peace.

But from out beyond the Periphery comes a new threat. A swift-moving military force of unknown origin, piloting BattleMechs unlike any seen before. Their power, speed, and ferocity are unparalleled. Nothing the Inner Sphere has can stop them. Some of the finest warriors and ablest units have challenged them and been crushed. No force has faced them and won.

They are the Clans! A military juggernaut whose sole reason for existence is battle. A race that selectively breeds itself for combat.

Humanity’s only hope is an alliance of mortal enemies. The Federated Commonwealth and the Draconis Combine, interstellar empires at war for 300 years, must now stand side-by-side—or face certain annihilation.

Since appearing in the Inner Sphere, the frenzied Clans have overwhelmed every planet they’ve invaded, brutally crushing any opposing force. Nothing the Great Houses have can stop them. Humanity’s only hope—an alliance of mortal enemies—may be doomed.

The Clan invaders have chosen their next objective—Luthien, capital of the Draconis Combine. House Kurita must now fight for survival on its homeworld. Hanse Davion is presented with a situation undreamed of…the final defeat of the Dragon itself. Should he attack his distracted foe and destroy the enemy his family has battled for over 300 years? Or should he reinforce a fellow House of the Inner Sphere against a force that Davion and the Federated Commonwealth might not otherwise defeat when their time comes?

And even if the Houses should somehow agree to stand together against the Clan menace, another just as dangerous threat lurks within their midst. ComStar, the semi-mystic sect that controls interstellar communication, schemes to hurl House Davion, House Kurita, and the Clans into a devastating war that will leave ComStar in a position to dominate the Inner Sphere…

Invaders from beyond the Periphery, the Clans have beaten the forces of the Inner Sphere repeatedly. Now the Clans are driving toward their ultimate objective—Terra, cradle of humankind, and hub of the ComStar communications network.

Nothing the Inner Sphere has can stop them. Entire regiments of BattleMechs lie smashed in their wake. The heir to the throne of the Draconis Combine is missing. Rasalhague is overrun. The Clans are sweeping toward the center of the known universe in a relentless tide.

Humanity’s only hope is the Inner Sphere’s most powerful traitor. ComStar betrayed the Inner Sphere by aiding the Clans in their conquests. Now the mystic sect that controls all interstellar communication must face the Clan hordes—alone. And a mysterious, elderly warrior—along with the untested warriors of ComStar—is the Inner Sphere’s last defense against total defeat.

Flight of the Falcon 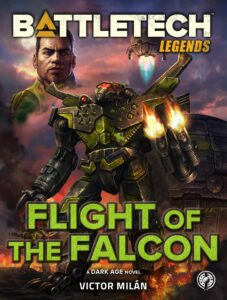 A Clan Jade Falcon invasion force is en route to eradicate the Steel Wolves—but its true mission is the subjugation of the Republic of the Sphere. Constrained by an imposed peace for decades, the Falcons embark on their most spectacular war in generations—and their lust for blood runs hot…

Siblings Malvina and Aleks Hazen are Jade Falcon’s best and brightest MechWarriors. Each achieved high command at a young age, and their bond is strong—but so is their rivalry. While Aleks believes warriors should protect the weak, Malvina is obsessed with dark visions of power and glory. If the leader of the Clan is destined to rule the Inner Sphere, then Malvina’s first step toward seizing that role for herself is to conquer the Republic…or utterly destroy it.

On Skye, Tara Campbell faces a major invasion with too few Northwind Highlanders to beat it back. Some in the Planetary Council want to negotiate with the invaders to spare Skye the frightful carnage already wreaked on other worlds by the Falcons’ inexorable advance. Now Tara—the Republic’s greatest defender—finds herself fighting dissension at home when unity is needed in the face of Skye’s greatest crisis…