Wolves on the Border – Taschenbuch 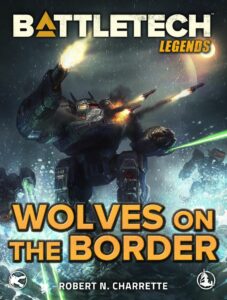 Bushido is the warrior code that governs all these concepts. As a MechWarrior of the Draconis Combine, Minobu Tetsuhara is bound by it, a code that demands loyal service to the devious Warlord Grieg Samsonov.

When Minobu came upon a strange blue and gold Archer, the field littered with its vanquished opponents, and its weapons empty, bushido dictated that he not destroy an honorable but helpless warrior.

For that, he became Dispossessed, stripped of his BattleMech—and his honor.

Minobu is then assigned as liaison to one of the Combine’s most elite mercenary units, who treat him with the respect due a fellow warrior, and give him a BattleMech to take the field of battle once more. The skill and power of these mercenaries is unparalleled, but when they refuse to renew their contract due to sabotage from within the Combine, Minobu is instructed to use all means to destroy them.

Now, bushido dictates that Minobu oppose his honorable foe, a man whom he has fought alongside in battle, and who deserves far better than betrayal… Jaime Wolf of Wolf’s Dragoons.